Readers! This is a great post. You all know how much I love the pool–and guess what? I was just introduced to someone who grew up in Cheverly AND wrote a book about the pool. Ahhh!!!! I love it. Even though Peter Harmon lives in LA, and his parents have left Cheverly, he still comes back with his family to visit the pool. Here is a post from Peter. I hope you will enjoy reading it as much as I have.

I grew up in Cheverly in the 90s and early 2000s. I rode my bike around free range, I played basketball at Town Park and Pool Park, and I spent my summers at the Cheverly pool. I loved my childhood there, so much so that even though I moved to Los Angeles to pursue work in Film and Television, I still try to make it back to the Cheverly Pool once a year with my wife and two kids.

Cheverly is a unique place. It’s a big small town. It’s diverse. It provides access to DC via the Metro, but it doesn’t seem possible that the Nation’s Capital is only about a mile away from the friendly oasis that is Cheverly.
Cheverly was not only a great place to grow up, but it still inspires my creative work. I have a young adult book series loosely based on PG County, Cheverly, and more specifically, the Cheverly Pool. The Happenstances at the Yellow County Community Swim and Racquet Club the Summer Before Last (yes that’s the title, yes it’s very long) is a fun, summer themed comedy YA novel that is a throw back to 80s/90s summer movies like The Sandlot and such.
The pool even let me have my book release party there in 2015… it was awesome.
So even though I didn’t choose to continue to live in Cheverly, it is still a huge part of my life. I have daydreams of moving back there to raise my kids, or at least retiring there, so I can walk over to the pool, play some dominoes or tennis with the other retirees, and eat lunch at the snack bar until my doctor tells me I have to stop.
Thank you to Lisa for letting me guest blog. Thank you for reading this short walk down memory lane.
Also, here is a link to the book if it sounds interesting to you:
http://www.tinyurl.com/thehappenstances
And a link to the book trailer where I talk more about the book and growing up going to the pool:
https://youtu.be/p6Z6VHcdRXs
Pete!
Preview YouTube video The Happenstances… Author Video with Peter Harmon (featuring “Fly Solo” by Diamond Youth) 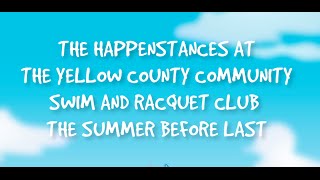